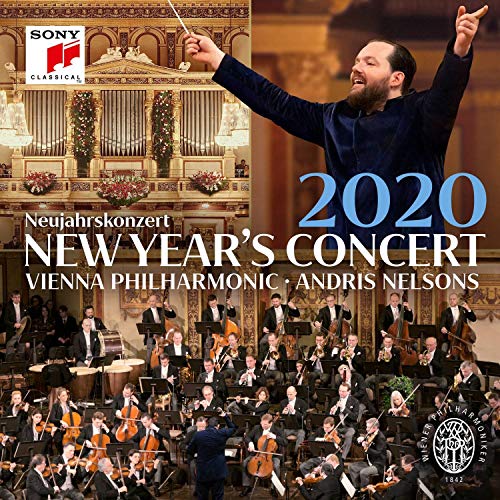 Sony Classical is pleased to announce the release of the recording of one of the world s most famous classical music events: the 2020 New Year’s Concert with the Vienna Philharmonic under the direction of renowned conductor Andris Nelsons. The live recording is available digitally on January 10 and on CD January 24, 2020. The DVD and Blu-ray will be available March 6, 2020. There are few concerts in the world that are awaited with as much excitement as the New Year s Concert from Vienna. Directed by Andris Nelsons, the Vienna Philharmonic ushers in the New Year with a concert in the magnificent Golden Hall of the Vienna Musikverein. The concert is relayed to over ninety countries all round the world, reaching an audience of more than fifty million. The 2020 New Year’s Concert will be conducted for the first time by the Latvian conductor Andris Nelsons, who first worked with the Vienna Philharmonic in October 2010 and who has been a regular and invariably welcome guest since then, not only at the orchestra’s subscription concerts in the Vienna Musikverein and at the Salzburg Festival but also on tours of Asia, the United States and Europe. So far he has appeared more than sixty times on the podium of the Vienna Philharmonic.

Looking back! This Day On The Web

Neujahrskonzert 2019 / New Year’s Concert 2019 [Blu-ray]
The 2019 New Year’s Concert will be conducted for the first time by Christian Thielemann. A native of Berlin, Thielemann has been a regular and welcome guest of the Vienna Philharmonic since 2000, with the result that his first New Year s Concert may be...
Leonard Bernstein – Young People’s Concerts / New York Philharmonic
Broadcast to millions in America and abroad, the immensely popular series was the winner of multiple Emmy, Peabody and Edison awards. Now this national treasure is available for the first time on DVD in a Special Collector’s Edition 9-disc set that contains 25 programs from...
Legend Of Zelda Concert 2018 (Limited Edition) (Original Soundtrack)
Limited Edition 2 CD + Blu-Ray pressing. The release captures the full orchestral concert of “Legend of Zelda Concert 2018″ scheduled Dec. 14, 2018 at Tokyo Bunkamura Orchard Hall. This will be the first concert in two years following the previous concert celebrating the series’...
Tips and guides for spending new years bangkok 2015
New Years Bangkok 2015 – Worshipping the new year brings a new beginning stacked with condition, new leaves and clear slates. By what framework will you celebrate? Bangkok get togethers control underneath is as long as the Prinsengracht. Our manual for the best social undertakings...
Elvis Lives- The 25th Anniversary Concert “Live” From Memphis (DVD Jewel Case)
The event was staged on the Pyramid Coliseum in Elvis Presley’s hometown of Memphis, Tennessee. Through the magic of modern technology, Elvis is reunited with his original TCB band, back-up singers and musical director for a unique concert special now available on this Elvis Lives...