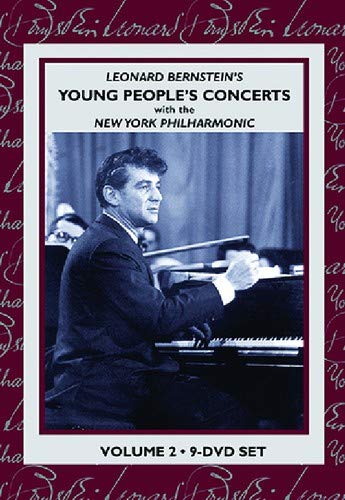 Kultur s first boxed set of Leonard Bernstein s Young People’s Concerts was the most eagerly awaited DVD release in Classical Music s history. The set has sold many tens of thousands of copies and continues to be extremely popular.

Now Kultur introduces the magnificent second volume of the Concerts, featuring 27 programs on nine DVDs and completing the series. Bernstein s wonderful combination of exceptional performances and clear, inspirational lecture superbly convey his own excitement about music. This beautiful new set will create further enthusiasm for the genre among young and old music lovers alike.

In 1962, the Young People’s Concerts became the first series of concerts ever televised from Lincoln Center. All of them were telecast on CBS at prime time, and syndicated in over 40 countries, introducing an entire generation to the joys of classical music.

Leonard Bernstein – Young People’s Concerts / New York Philharmonic
Broadcast to millions in America and abroad, the immensely popular series was the winner of multiple Emmy, Peabody and Edison awards. Now this national treasure is available for the first time on DVD in a Special Collector’s Edition 9-disc set that contains 25 programs from...
The 25th Anniversary Rock & Roll Hall Of Fame Concerts [Blu-ray]
On October 29th and 30th, 2009, rock ‘n’ roll royalty held court at Madison Square Garden for what have been called ‘the best concerts ever,’ where ‘rock ‘n’ roll history was made.’ Recorded live with 30 camera angles plus state-of-the-art recording, we captured the sights...