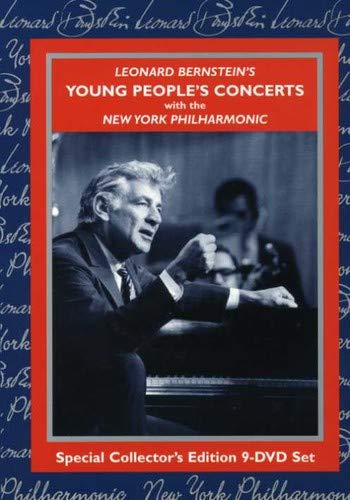 Broadcast to millions in America and abroad, the immensely popular series was the winner of multiple Emmy, Peabody and Edison awards. Now this national treasure is available for the first time on DVD in a Special Collector’s Edition 9-disc set that contains 25 programs from the Young People’s Concerts Series.Leonard Bernstein earned glory as a composer, conductor, and pianist (classical and jazz), but nothing gave him more pleasure than the joy of teaching. He presented the unique blend of spoken words and music known as the “Young People’s Concerts” throughout his tenure as music director of the New York Philharmonic and for several years after. His enjoyment, and his audience’s, can be seen vividly captured by the video cameras. He is an intensely interactive teacher, getting his audience to sing, springing a quiz full of trick questions, and singing a Beatles song to demonstrate a point.

Bernstein is completely at ease talking to his audience. He can take the most abstruse subject – the meaning and function of intervals, tonality and atonality, the links between Gustav Mahler’s troubled life and his music – and present them to a young audience with clarity, without condescension, and with a clear sense of the material’s value. His subject-matter is enormously varied. For Igor Stravinsky’s 80th birthday, he simply tells his audience the story of Petrouchka while conducting a dazzling performance of the colorful ballet. For a program on “Folk Music in the Concert Hall,” he plays some of Canteloube’s folk song arrangements and the boisterous finale of Ives’s Symphony No. 2, full of borrowed pop and folk melodies. The influence of folk music is shown in folk song imitations by Mozart and Carlos Chavez.

The sound and images, taped over a 15-year span when the art of recording was rapidly advancing, are varied in quality; the series begins in black-and-white and ends in vivid color. Not all of the programs are equally compelling, but all are worth close and repeated attention. –Joe McLellan

Lots more links on the right - try a few.